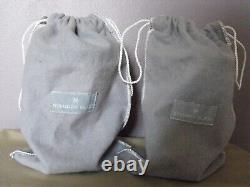 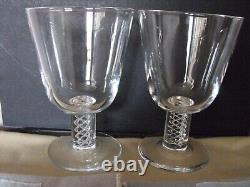 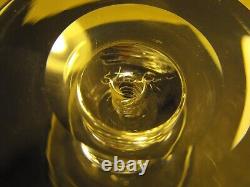 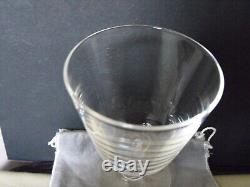 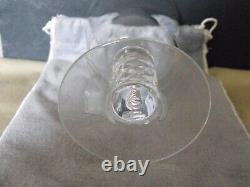 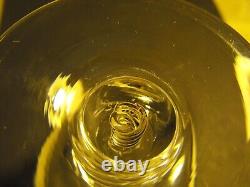 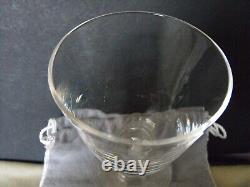 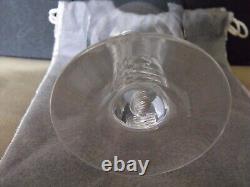 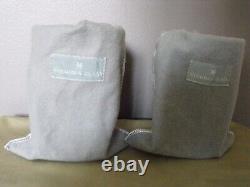 Steuben 8011 Air-Twist red wine glasses, 1950, signed, Modernist. 5-1/8" high x 3-3/8" opening, although no two are identical. In 1932, the proprietary formula that Steuben is best known for was developed. The glass produced from this formula has a high refractive index, causing cascades of rainbows to emit from the glass when hit by light. These Steuben 8011 Red Wine glasses are about 3/8 taller and have a wider rim opening than the smaller Steuben 8011 White Wine Glasses.

I've had these for many years, always carefully stored. Thompson was born in Nebraska and received degrees in architecture from the University of Minnesota and the Massachusetts Institute of Technology. Thompson joined the design department at Steuben Glass Works in 1936 and was a senior staff designer until his retirement in 1974. Thompson's designs were included in every Steuben Glass exhibition during his tenure.

His works are in the collection of The Metropolitan Museum of Art, New York City; the William Rockhill Nelson Gallery, Kansas City; Palais du Louvre, Paris; and the National Gallery of Modern Art, New Delhi. This item is in the category "Pottery & Glass\Drinkware & Barware\Drinkware". The seller is "markdavid99" and is located in this country: US. This item can be shipped to United States.